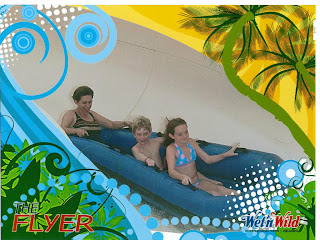 This is what my son, Wayne, said as we were finishing up a very fun day at Wet 'n Wild Water Park in Orlando yesterday. "The bomb one," is next to "Der Stuka" , and is a water slide that is essentially vertical (okay, maybe it's 85 degrees, not 90). At six stories high and 250 feet long, this is not a ride for the faint of heart (i.e., me). Although earlier in the day, Wayne (who is 9) said he "wanted to wait until he was 10" to do this ride, some adventure loving yearning kicked in before we left, so off we (me, Tenley (12) and Wayne) headed to the slides. Turns out Wayne decided on Der Stuka instead of the bomb slide (main difference being about one more degree of vertical drop in the bomb one than Der Stuka).

As Tenley and I waited for Wayne to climb the long winding staircase up to the top of the slide, we watched riders descending at 40 mph. All I could think was, "I wonder if any rider has ever failed to heed the instructions to keep their arms and legs crossed and fallen out of the thing to their death." I thought of all the times that Wayne has failed to follow instructions "the first time" (any number of report cards and sisterly reports can back me up on that one) and wondered about the wisdom of sending him up 6 stories. As he passed the 48" height requirement mark (barely passing), the visual did not help allay my fears at all.

As time passed and Wayne did not show, I was wondering if he kept going to the back of the line trying to get his courage up. Turns out it was just a long line (status quo for WnW).

After a day of sibling bickering (another status quo), I was amazed to see how anxious Tenley was about Wayne's welfare. "I can't look" was repeated several times.

Finally, it was obvious that Wayne was at the top of the line --- we only had to look for the littlest rider.

And within a space of a few seconds, there he was. Turns out he did "follow instructions the first time" and kept everything that was supposed to be crossed, crossed.

In characteristic Wayne fashion, after my celebratory high five and Tenley's happiness for him, his first words to his sister were, "too bad you were too chicken to go."

I guess the next instruction to work on has to do with humility.......

At least he'll be alive to be taught!
Posted by Unknown at 10:10 AM No comments: Links to this post

Jump into the unknown! 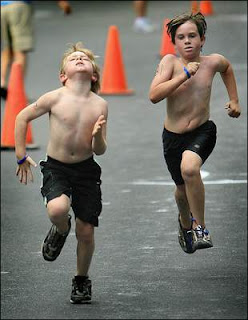 On her website, www.triathletemom.com, Suzanne Achtenhagen features the following credo:
Believe in yourself.
Live your dreams.
Jump into the unknown.
Here is Wayne and his friend, Alex, at the conclusion of the Red Hills Kids Triathlon here in Tallahassee today. This moment, from a parent's perspective, rivaled the great moments in sporting history.
Go, Wayne! Go, Alex!
Posted by Unknown at 9:58 PM No comments: Links to this post

Getting Ready for Soap Box Derby! 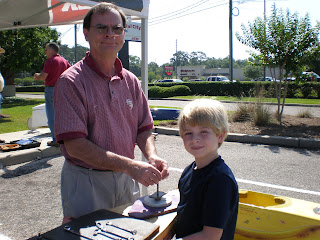 This is a picture of Wayne and Wayne working on Wayne's soap box derby car in preparation for the "big race" on June 14, 2008!
Wayne's car, which is a "hand me down," has a big banana on it. You can't miss it in a race!
For more information on Soap Box Derby, visit: www.aasbd.com.
Posted by Unknown at 2:26 PM No comments: Links to this post

This is my first post to my blog. I just read "Julie and Julia," though, so I am inspired.

I will soon post pictures of Wayne Kevin putting together his soap box derby car. It's fun to see a 2008 kid doing something so low-tech and having fun.

Paula
Posted by Unknown at 1:08 PM No comments: Links to this post