Obama - The Historic Journey - My Friends Cast Their Votes!

What is your first childhood awareness of the presidency? For me, it had something to do with the "casualties" count in Vietnam, followed by Watergate. My children are growing up with different presidents, certainly, but with differently "packaged" Presidents and a program called "Kids Voting" that teaches them about the electrion process. When http://www.momcentral.com/ invited me to join the blog tour for Obama - The Historic Journey, I wondered if this book had a place in my children's 24/7 media - infused world.

My youngest voter (my son, Wayne, 9) looked at the table of contents and said, "we need to turn to page 17." The chapter titled, "A Skinny Kid With a Funny Name" appealed to him. Subsequently, we discussed the fact that Obama's favorite tv show is Sportscenter and discussed President Lincoln's Bible which was used during the inauguration. It was when we started exploring the page of children's letters to President Obama and their drawings of him that my son was most interested -- we almost missed the bus due to our absorption! When I asked Wayne what he would say in a letter to President Obama, I learned that he had spent what attention he was going to spend on this book.

When my daughter (Tenley, 12) didn't want to read the book in the midst of "last week of school" euphoria, I asked my friend Yasmine (13) to look it over for me. Yasmine just completed 8th grade, and had a "platform" of comments for this book.

What Yasmine liked best: That Barack Obama is the first African-American to become president. She wished, though, that he had shared more about his close childhood friends. She also would have preferred more details about why he chose to run for president instead of the preponderance of pictures.

Something that Yasmine learned that she did not know about Barack Obama: That he went to Harvard Law School, that he spread his mother's ashes in the river, that he liked to play basketball in his spare time, and that his favorite food is chili. 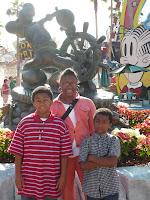 Yasmine shared a few additional comments that intrigued her about this book: Malia was born in 1998 -- my brother Christopher was born the same year! Sasha was born in 2001 -- my other brother Dezmon was also born in 2001!

Here's a picture of Yasmine, Christopher, and Dezmon:


Lastly, I "polled" my friend Ann, who homeschools her son, Alex (8) about the book. She said that she "particularly liked the quotes throughout the book, the stories including the first lady and their daughters, and the pictures of the President and suggestions made by children at the end of the book." She would "veto" the fact that President Obama was a smoker, though.

And here's my vote. I enjoyed the summary this book provided me, an adult reader. It covers a lot of territory in a fairly simple way. Of course, I am the reader who found the section in "The Audacity of Hope" where Senator Obama (in Washington for a crucial vote) is urgently called by his wife (in Chicago) and reminded to bring ant traps home -- it appears the Obama home was being infested -- one of the most interesting. So maybe what appealed to me was the "little things" that even a world leader has to contend with, and that he and his family may have in common with mine.


This book has features that appeal to children of various ages. The pictures appeal to the younger children, and the text is valued by older children who are motivated to read about the topic. As a mom, I would find it slightly more approachable if it were "throw it in the backpack" size. Instead, it is more "I need to check this out for my book report" or "coffee table" size.


All in all, however, I would cast my vote for this book. More importantly, I cast my vote for any reading material that encourages kids to be involved in creating the world in which they will grow up. As Frances Moore Lappe said, "Every aspect of our lives is, in a sense, a vote for the kind of world we want to live in." Kids and adults (like Wayne, Yasmine, Alex, and Ann) who are willing to learn more about our leaders, whether they agree or disagree with their politics, are voting for the kind of world I want to live in!
Posted by Unknown at 9:52 PM 1 comment: Links to this post