I got home very late this evening, from a fun day of being an extra on an FSU film, and considered not posting, but some habits are hard to break.  Hopefully there's still a little coherence left before I truly conk out for the night.

Let's get that last New Year's resolution out of the way: 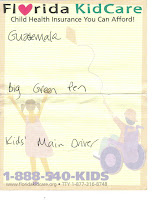 Number three is "kids' main driver."  Even at the time I wrote that as one of my top three goals, the period of my life when I was paying college students (and whoever I could rustle up with a clean background check, a compatible schedule, and decent rapport with my children) to shuttle them from school to gymnastics, dance, and various other extracurriculars was largely in the past.  Tenley wasn't at the gym three days a week any longer.  Wayne Kevin was between "extracurriculars."

When thinking about why "kids' main driver" is still in the top three, I get around to the fact that I just want more time with them, period, and frequently the way to get time with them is to be at the wheel of a car taking them somewhere.

I know plenty of working parents disagree with me, but I know that for me, it is not possible to get "quality time" without accruing "quantity time."  Tenley and I drove to Orlando a couple of weekends ago for a shopping trip (her Christmas gift), and after four solid hours in the car to Orlando, lots of driving around Orlando, and four solid hours back, the one substantial conversation we had occurred literally five minutes from home as we were on the exit ramp.

I will admit that I am downright envious of the moms (and a few dads) I know who can pick their kids up from school (or even meet them getting off the bus) and not leave their children at school until 6 p.m. (a point at which, I promise, everyone is pretty tired).  And although those times that I carved out a way to be the one taking Tenley and Wayne to gymnastics mainly consisted of brother/sister yelling matches with me trying to mediate (while thinking why on earth can't everyone just get along), it still meant something to me that I was with them, that I would be the first to know who had a good day, who had a bummer of a day, and who liked what on the radio.

We had great drivers, many of whom I have stayed in touch with.

But they weren't me.

I am not in a position to drop commitments left and right in order to achieve goal number three right now.  But keeping it on the list reaffirms my desire to be "at the wheel" while my children are the passengers in my parental "vehicle."

The mom taxi doesn't collect a cash fare, but the good news is the meter will run until all those exit ramps for the important conversations are in the taillights.

I love that analogy of being "at the wheel" while your children are "passengers in your parental vehicle"! The older my children get, the more I realize what a short time we have with them. And once they hit middle school, it's hard enough to get a conversation going with them even when they're standing right there. My favorite way to get time with them is to play games, something they'll still deign to do with boring old mom (even Jillian, who hates all games but will suffer through a round of Scrabble every now and then.)